Soon it’s IATEFL Conference time again. This year will be my second time there, after following it online or a couple of years. It’s going to be a special one as it is the 50th anniversary of the IATEFL Conference.

Last year, I attended the conference in Manchester, where they ‘caught’ me and my colleague when saying hi to other attendees who we’d worked with previously.

Like last year, I’ll be there again in different roles: as a teacher, as a freelance editor and materials developer/writer, and as a team member of English360.

I don’t like big gatherings and find it very exhausting, but at the same time, I really enjoyed meeting some people face-to-face who I had known online for many years. It also is a very intensive week of professional development. I particular found the MaWSIG (Materials Writing Special Interest Group) PCE (Pre Conference Event) very useful and it’s the one I look most forward to this year.

This year, I’m also going to give a talk myself on ‘How to start writing for publication: a teacher’s personal journey’, which will take place on Friday, 15 April at 10.25 in Hall 9.

To make the most of the conference, I’ve been reading through the programme and trying to choose the talks and workshops on topics that I’m most interested in, but I’m finding this very difficult, because in my different roles, I’m interested in many different things from EAP/ESP to technology, to writing materials. And there is hardly a talk that I want to attend that doesn’t collide with another one that I’d also like to hear, as there are so many presentations that take place in parallel.

I attended two plenary sessions at IATEFL in Manchester. One was good; and my simple criteria for this is that it made me think. The other one was a complete disappointment… This is maybe why I didn’t go to the one by Harry Kuchah. But lying in bed with a cold and not able to do much work, I thought I could spare an hour and watch the recording. I’m glad I did. Kuchah’s talk or, as he calls it, story is definitely worth watching and listening to.

He starts out by giving definitions from the literature of what “difficult circumstances” generally means (30-50 students in one class, few resources, …). Then, he shows us images that show what his difficult circumstances were (200 or more students in one class, no materials, no facilities, …). Adapting to the difficult local teaching and learning circumstances, he managed to get what we, in more “privileged” circumstances (meaning smaller class sizes, lots of resources, technology in the classroom, etc.) hope to achieve in our classrooms: learner autonomy, real collaboration, student-teacher partnership, authentic materials, responsibility for one’s own learning, sharing, etc.

He also talks about how he took what he learned during his MA studies in the UK and applied it to the local circumstances and how he has helped other teachers make the best of their circumstances. His research and the research “community” of teachers and students he built is remarkable. It shows how when teachers (and students) are involved in research and when teacher development takes into consideration local circumstances, it all becomes more meaningful and real change takes place. I suggest you watch the recording for details on his research and the outcomes. Again, just like above with what he achieved in the classroom, the outcome of his training sessions and his research is just as relevant for us as for those teachers in the local context of Cameroon.

I am truly impressed and inspired by Kuchah’s achievements. However, one thought that also kept popping up in my head was this: I wonder sometimes whose circumstances are more difficult? Sometimes, I look at students such as those of Harry Kuchah and envy their teachers as the students seem so motivated. To me not having technology or coursebooks is not that challenging. I like working with the language (needs) that emerge in the classroom from the students. I’d find the large class sizes very challenging, I admit. But I think the main challenge we have in many “better off” countries is learner motivation. If learners are motivated (and teachers, obviously), I feel, other problems can be overcome more easily.

Anyway, take the time and watch the full story: I wanted to embed the video, but it doesn’t seem to be allowed. You can watch it here.
(At the same link, you can also download the slides and handouts.)

There seems to be a growing interest in images in coursebooks. Several sessions at the IATEFL conference in Manchester focused on this topic.

The main message for me in both sessions was that in the past images in coursebooks were mostly used for decorative purposes, but today, they are often more central to the unit (Ben and Ceri), in fact, sometimes even the driving force for a whole page or eve double page (Hugh Dellar). Having trained as a photographer and having worked with images a lot, I was happy to hear this.

Hugh Dellar listed the following functions that images can have in coursebook:

He suggested that the last three are the more interesting uses.

I would say that all uses, including decorative uses of images are good if the images are chosen well and don’t confuse the learners. But I agree that images can and should sometimes have a more central role.

Due to my personal interest in images, I have often based a whole lesson around them, sometimes around a single image. Not only do learners often feel engaged by images if they are well-chosen and meaningful, but as their isn’t much or any text, a lot of language emerges from the learners.

I’d like to give one example of an image and how I used it for a lesson. This is just one example, and in this case, it was I who chose the image as I felt strongly about it. However, I also knew my students and their interests well and knew they would have a lot to say about the image. Of course, learners can be asked to bring their own images to the class and possibly even create their own questions and task around them, or simply talk about them.

In this case, the image was that of a new church that was being built in my city then, but not many people knew about it yet, and this was crucial as otherwise the activities I had planned wouldn’t have worked. It’s also important that it has got some relevance to the students. In this case it was an image of a local building in a newly developed area. Also crucial when choosing an image is that it shows something controversial or something that would trigger highly emotional reactions. The architecture of the church was extremely unusual and it was planned as an ecumenical church, another hot topic for many.

Here are two images of the church — the one I used was black&white and there was no green park and no glass windows. 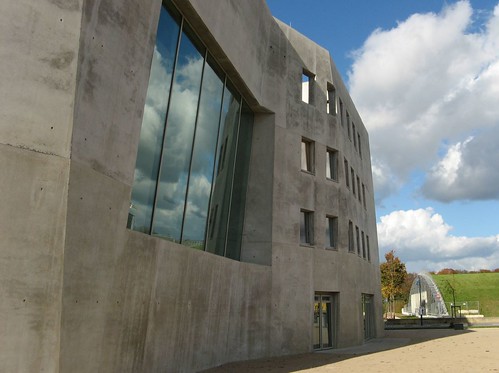 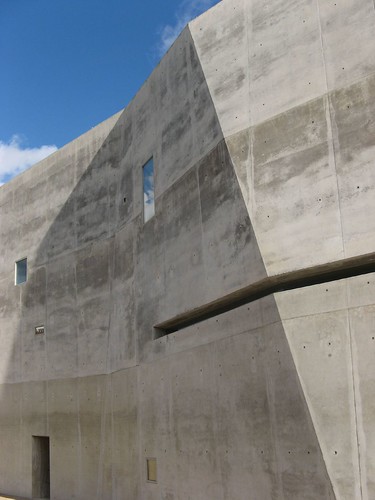 I had several students who were taking general speaking classes and liked talking about different topics of interest. I don’t remember the complete lesson plan, but I started by showing the students the image which I had cut out from a local newspaper and asking the students questions about the building:

Once they new what it was, I had prepared more questions:

I had more questions ready which gave the students the opportunity to produce and practice different grammar, vocabulary and skills.However, I didn’t always go through my list of questions with the students. Sometimes, they wanted to talk more about one question or aspect of the church or the controversy, etc. A student who was a regular worshipper was interested in different questions or aspect than one who was more interested in architecture, for example. Sometimes, a student would take over and make it completely their own lesson, talking about things I hadn’t thought about.

I used the image mainly in general English speaking lessons, but it can easily be used for practising other skills. The students could, for example, be asked to write a letter to the mayor, the architect, or the newspaper to state their opinion, etc.It could also be used in ESP classes with a different set of questions.

The lessons with this particular image were always interesting for the students and for me; the discussions were never the same and I always learned something new from my students too.

This is only one example of a lesson based around an image. It could have been done entirely differently. What also works well is image comparisons with multiple images. Another “classic” image activity: The teacher brings some personal images and tells stories about them; then, the students are asked to do the same in the next lesson. I’m sure you know many more. I’d be happy to hear about your favourite image activity.

Can such lessons flop? They certainly can. There’s a lot that can go wrong when images are used, which might be worth another blog post…